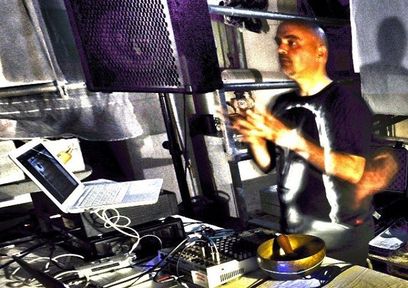 SHE-D 43 Gardiner Lane D1
(lane on the rear of HILL 16 PUB on Gardiner st,
or from BUS PARKING on Mountjoy Sq South)

ALL EVENTS ARE VIDEO AND SOUND RECORDED, as part of the CULTURAL ARCHIVE policy and participants agree to for their image to appear in SHE-D's archives and publications. Soon some of the outlets of the four years activity, from the three experienced spaces, will be available, together with the new website. You will be able to enjoy then the past experiences, even if you missed them. Participants and artists agree to leave a copy of each sound/photo/video recorded material produced by them for the same scope.
VEGETARIAN ECO-FRIENDLY policies to be respected on site

PACIFIC 231
PIERRE JOLIVET, since 1981 as Pacific 231, starting with the limited edition Psychic Euthanasia tape recorded in total stereo, he has been involved with the VP 231 record label for a few years alongside Vox Populi!. His first LP, Unusual Perversions, was released in 1984. After some references, VP 231 was terminated following the seminal double LP L'Enfer est Intime international compilation. Today, he is a co-producer on all his own productions. From his 1987 Power Assume second LP on Bunker Records in Canada to his most recent Just Digging The Crazy Art (with Lt. Caramel) LP with Rotorelief in France and the 2xCD 1983-86 Compendium on Tesco/Functional in Germany. In 2010, Pierre Jolivet became a member of the jury of the prestigious Prix Russolo established in 1979.
http://pacific231.com/
http://myspace.com/pacific231
http://facebook.com/pacific231

LT. CARAMEL
a.k.a. Philippe Blanchard achieves his music in the Studio Acteon in Faverges (Haute Savoie) and the Studio Forum in Annecy (France) from which he founded the annual Festival "The noise of snow". Hunter of sounds, he collects the resonant matters at the time of his journeys (Syria, Iran, Rome, Venice, Madrid, Sarmakande, Romania, Moscow, St Petersbourghâ€¦). His Art is an assembly of unexpected resonant objects that transform themselves in some dadaist twist for the ears. He was the prize-winner of several international awards (GMEB in Bourges, Luigi Russolo (Italy), Radio France, The Muse in Circuit (Mauricio Kagel), CIMES-FICS (Prague). He received also the award "Hunters of sounds" from Radio France International 2000 for his music "Captain Cook".
http://caramelos.free.fr/
http://myspace.com/lieutenantcaramel
http://facebook.com/felipe.caramelos

ONTHOLOGICAL STRUCTURES: DAWID BISTRAM/MICHAEL KLICKI
We are based in Dublin and happy to participate in interesting non-mainstream musical projects. We provide industrial ambient with elements of noise, dub, IDM and stylish visuals.
http://soundcloud.com/ontological_structures
www.myspace.com/pandafestival

REDMOON syzygy
is the new title given to the irregular events planned by McBett @ SHE-D, during the regular activity and act to host international guest artists, traveling or in residence, to interact with locals and space in various ways. Different media and background will be explored.
The planning of these events can be a last minute schedule, given a possibly short therm availability.
Booking is suggested.

SHE-D
www.mcbett.ie
is a private Work in Progress/Cultural Documentation Centre run by NAUTILUS COLLECTIVE. It aims at experimentation in creative and participative ways to socialize and communicate through the arts. SHE-D focuses in the Inner City area of Dublin.
By attending you become an active participant in its projects.
Direct participation is encouraged in a variety of ways,
which are discussed in weekly meetings on Thursdays @ 7pm
Events are, in many way, "Works in Progress".
You will keep the update being part of SHE-D mailing list forum.
If you like to receive regular news about the activities write to theshed_dublin@yahoo.ieto be included in the mailing list.
If you are not a SHE-D follower, you can unsubscribe from the list or blogs whenever you request it.
BYOB
SHE-D is a project developed and promoted by McBett

If you have any interest in booking, organizing and/or participating
please write to:
theshed_dublin@yahoo.ie or call 0877954727
general info: 0877954727
myspace.com/mcbett
www.mcbett.net

(*) Donation means that you are expected to donate the mentioned amount as you may be the only active supporter of the space raw costs.
If you like to donate something more you are welcome, if you are in great difficulty, you will be allowed to enter even from less, however the SHE-D exists only thanks to your support, as artists and audience, so...