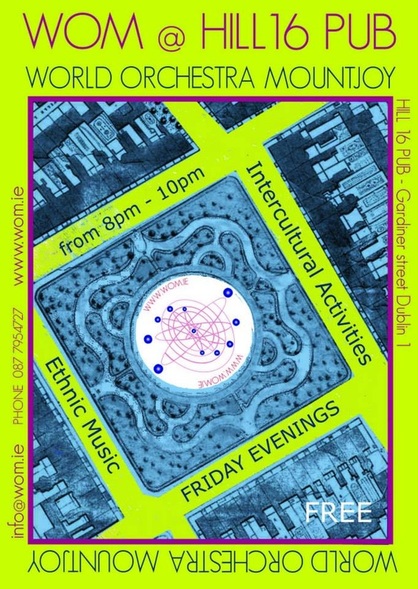 Inspired to the Orchestra di Piazza Vittorio, World Orchestra Mountjoy Square (WOM!) has been a project grown up  by artist Eli McBett to harness the cultural diversity of the areas around Mountjoy Square in Dublin.
WOM! was looking for musicians or dancers with a competence and passion for music and/or dance, open to exchanging and learning from other cultures’.
WOM! hosted weekly meetings on Tuesdays at 8.00pm, with exchange events and workshops planned, and a main event was scheduled for 21 September as part of the Culture Night celebrations (but then was cancelled as funds were not confirmed)
WOM! was promoted and devised by McBett prod, MSS, Pavée Point.
The orchestra’s main event to be sponsored by the Arts Council of Ireland, Dublin City Council, Croke Park and Dublin Bus then cancelled.
WOM! also wished to involve more local communities and sponsors.
https://www.facebook.com/photo.php?v=509833279031142
graphic work by McBett prod/Sabrina Cuomo

Article on METRO EIREANN
Do you have a competence and passion for music? Are you open to learn and exchange from new cultures? Why don't you join the World Orchestra Mountjoy, then? This project started almost a year ago from an original idea of Italian artist and director Eli McBett and, apart from making music, purpose of the orchestra is also celebrating the multicultural diversity of Mountjoy square and neighbourhood, where a high percentage of migrant people live.

“The World Orchestra Mountjoy are currently seeking for new members”, as Eli McBett told the Metro Eireann, “at the present moment, there are six members and we are looking for other musicians; both different cultures and different musical background are very welcome to join us.” Even if the project of a multicultural orchestra already existed one year ago, it had some technical problems to start, or better saying there were some misunderstandings with the previous musical directors. Now the project is about to have its reboot and the musicians are willing to play different music and sounds. As Eli McBett said, “sometimes it can be quite hard to mix together the different musical traditions; some of them (the musicians) don't read music, some others find it difficult to play sounds that are so far from their usual ones, such as Chinese melodies.” Nevertheless, the idea behind the project is that everybody plays their own repertoire and then all together try to create something harmonious and meaningful to onvolve the audience. “We are organizing workshops, jam sessions... it is like a 'round table' (a panel discussion?) everyone plays his music, but conscious of the others and others' music” added director McBett.

Metro Eireann spoke with two African musicians involved in the project: Lamek from Malawi and Moemi from Botzwana. Lamek (24) is a pianist, he started when he was very little, he has been living in Dublin for two years now and he is currently studying at the university. Moemi (44) plays the electric bass and the trombone, the latter for more than twenty years, including an experience in his hometown police musical band; he moved to Dublin more than three years ago. Both have been playing in the orchestra since its creation and they really enjoy it. The orchestra can count on two more African musicians, plus an Irish and a Rumenian; they play respectively electric guitar, sax, banjo and violin.

The World Mountjoy Orchestra plays every Friday in the pub Hill 16, Middle Gardiner street, Dublin 1.
Their headquarter is located at the Ozanam House, 53 Mountjoy Square – of course. Further informations on www.wom.ie


FEED BACK
Why Ireland is a difficult context to such popular events:
Unfortunately the planned main event went totally hacked by a disastrous interference by Latin American Association leader, Rafael Abarca, who soon revealed to be a pure trickster:   this man used his invitation to collaborate to the project to wildly grab contacts from musicians and sponsors, convincing them to not waste time in the Orchestra endeavour. He forcibly deranged activities towards some improvised endeavours, playing on the desire of notoriety visible in some musicians, pretending to be producing a concert at the Concert Hall, which was sold as a project more valuable than the one in the Mountjoy Square and which distracted the attention of the musicians to a  totally different and failure event. He invented a newspaper called Yelp! to gain sponsors and sell to international students.
His  concert was in fact only happening after by his ability as manipulator, to convince musicians and institutions to pass money destined to the Orchestra's participants, to rent instead the Concert Hall, (which means he would have not been sponsoring it otherwise) and this was totally sick to a whole long term, sharply aimed participatory project.
that concert ended as  a mix of good musicians (paying with their money their performances) and mediocre scholastic intervention from schools who provided the main audience, an audience mainly of friends and relatives, which paid no relevance to the qualified musicians careers.
the Italian Institute director at the time, Angela Tangianu, playing a very direct part in this shallow and scattered behaviour, together with the Mountjoy Square Society, which, also entered the project offering as sponsor and then pretending to use money for different endeavours unplanned events.
Abarca manipulated italian composer Antonio Breschi and portoguese singer Paulo Braçanza, convincing them to sponsor his concert, meantime not allowing any of the musicians from his contacts telling they should get paid.
Abarca brainwashed musicians with false promises of quick success and popularity, discharging the main propose of the challenging project: to play together and to compose music in an international way, opening to the different stuyles to some more contemporary outlet.
WOM was a genuine project meant to a longtime work to revalue the Mountjoy Square area, so the free collaboration was required in exchange of the establishment of a proper local endeavour where everyone in the project was contributing for free.
The free collaboration requested from Abarca was instead a mere violent exploitation. It left musicians with no future developments, no publications, creating only an indecent gap and depression.
The suggestion to incompetent exploiters is to desist from pretending quick solutions to projects which require a proper development time and are due rooting to be effective and professional.
I will discourage any endeavour who would try to sell a fake image of the same product, with no respect for the actual specific and highly experimental nature of the proposal.
link to Journal of Music